On 27 September 2021, the Local Government, Housing and Planning Committee launched an online survey to gather views on the Scottish Government’s plans to require local authorities to introduce a licensing scheme for short-term let accommodation. The closing date for submissions was Friday 29 October 2021.

The survey posed a series of questions exploring respondents:

A total of 2578 responses were received from the following categories of stakeholder:

Before reading the analysis of responses to this survey, it is worth remembering the following:

• Respondents were self-selecting: The survey did not seek views on the proposed licensing system from a representative sample of the Scottish population, as happens in public opinion polling. This means that the results reported in this analysis are unlikely to reflect the true distribution of opinions on the proposals held by individuals and organisations across Scotland and should not be read as such.
• Detail: The proposed licensing system is relatively complex and has been through several iterations. While the likely contents of the system have been extensively trailed, the final version of the Regulations have yet to be published. This complexity and uncertainty about the final version of the proposed scheme may have acted as a barrier to responses.
• Stakeholders: The proposed licensing regime is of interest to a wide range of stakeholders, with often competing priorities and views. Unanimity of views on the possible introduction of a licensing scheme was always unlikely, which is reflected in the analysis.
• Timescales: The time available for SPICe to analyse a significant number of responses was short, limiting the scope of this analysis.

Responses to the survey covered a wide range of issues related to short-term lets and the operation of the housing and planning systems. Analysis of these responses has identified several commonly recurring themes, which are very briefly outlined in the sections below. It is important to note that this is not a comprehensive list of all the points made by respondents, rather a summary of the key issues of interest or concern raised.

The following sections summarise the responses to the survey questions.

Question 1 of the survey asked “'How would you describe your view of the proposed licensing system for short-term lets?” and presented five possible answers. The results are set out in chart 1 below: 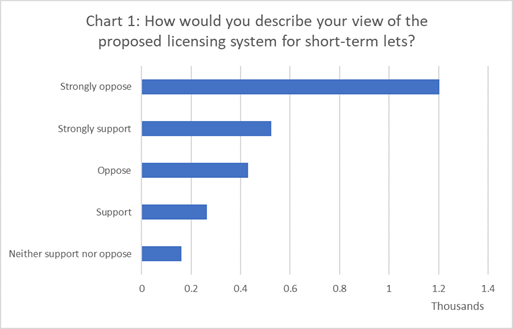 Again, it is important to stress that this was not a referendum on the proposed licensing system and the results cannot be interpreted as reflecting the views of the Scottish population.

This high-level overview obscures widely divergent views on the proposed licensing scheme expressed by the different categories of respondent, as shown in Chart 2 below: 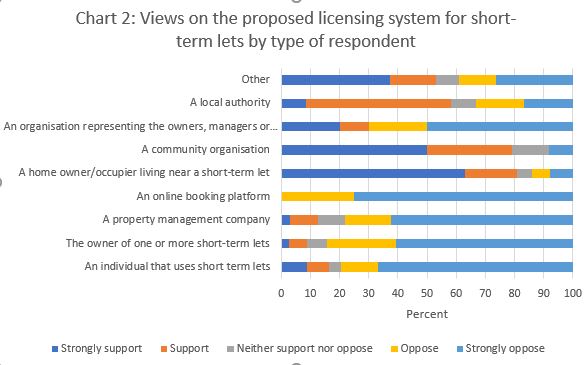 Those with a direct interest in the short-term let business (owners, industry representative groups, property managers, online booking platforms and users) are overwhelmingly opposed or strongly opposed to the proposed licensing scheme. Those who are affected by the operation of short-term lets (those living nearby and community groups) are overwhelmingly in favour of the proposed licensing system.

The views of the 12 local authorities which responded, out of a total of 32, were predominantly supportive of the proposed licensing scheme, as set out below:

The views of the “other” category are mixed, reflecting the range of respondents within that category. Of the 60 owners/operators of bed and breakfast or guest house accommodation that responded under “other”, 27 (45%) are strongly opposed to the proposed licensing system and 11 (18%) are opposed.

Respondents were presented with different lists dependent on whether they had answered “strongly support/support”, “neither support nor oppose” or “oppose/strongly oppose” to question 1. Again, the reasons chosen for inclusion in each of these lists were identified following analysis of responses to earlier Scottish Government consultation on the licensing of short-term lets.

Answers given to question 2 by respondents who strongly support/support the proposed licensing system were as follows: 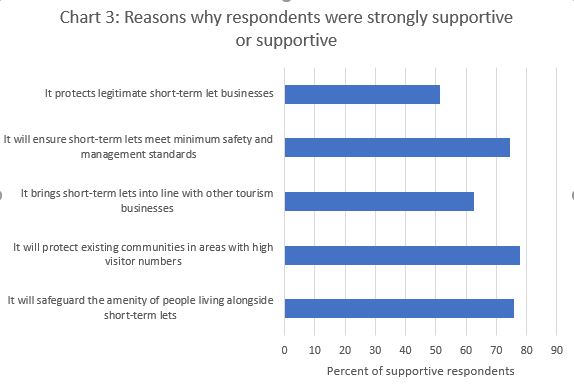 467 strongly supportive/supportive respondents also made some additional comment or offered further explanation in support of their response to question 1. The key themes recurring through these comments were:

Answers given to question 2 by those who were neither supportive, nor opposed to the proposed licensing regime were as follows. 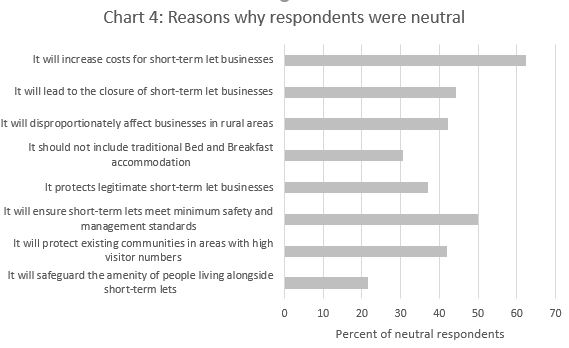 69 respondents who were neither supportive nor opposed to the proposed licensing system also gave additional reasons to support this view. The key themes recurring through these comments were:

• Any licensing system needs to produce more benefits, particularly for those living next to short-term lets and surrounding communities, than costs, especially to the wider Scottish tourism industry.
• Licensing should be focused on where it can do the greatest good, particularly short-term lets in tenements and other flats, rather than on detached homes and purpose-built holiday accommodation (such as tee-pees, yurts, and pods) located in rural areas.

Answers to question 2 by those who opposed or strongly opposed the proposed licensing system for short-term let accommodation were as follows: 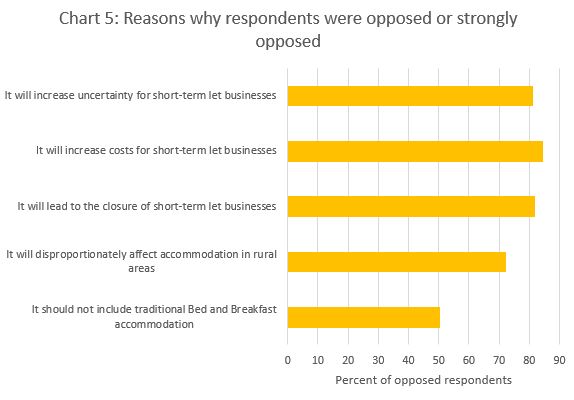 848 respondents who were opposed or strongly opposed to the proposed licensing system also gave additional reasons to support their view. Many of the responses further emphasised the potential impacts listed in Chart 5 above. The key themes, not already highlighted above, running through these comments were:

Question 3 asked respondents “Thinking about your response above, how do you think the proposed licensing system could be improved?”. Again, responses were collected under the three broad groupings based on answers to question 1, that is “strongly support/support” (467 comments), “nether support, nor oppose” (106 comments) and “oppose/strongly oppose” (1331 comments).

Many of the responses, across all three groupings, reiterated points already highlighted above. The following sections outline the key themes, not already mentioned, running through these comments.

• There should be a limit/cap on the number of short-term lets within defined areas.
• Short-term letting should be subject to a robust scheme of business taxation.
• Council licensing departments need to be suitably resourced to carry out regular, pro-active inspection of licensed properties and, where appropriate, take speedy enforcement action.
• The ownership of a short-term let should be subject to certain restrictions, suggestions include a ban on owners based overseas or a requirement for owners to live locally.

Neither support, nor oppose

• Licensing fees should not be set at a level which threatens the viability of short-term let businesses, particularly those involved in house sharing or occasional letting.
• The proposed licensing system should not apply to traditional Bed and Breakfast accommodation, including small Guest Houses, as these comply with relevant legislation and do not cause issues for neighbours or surrounding communities.

• The proposed Scotland-wide licensing regime should be scrapped, as it is:
o disproportionate to the problems it claims to tackle
o duplicates work already undertaken by VisitScotland
o unfairly penalises the vast majority of short-term let owners, who provide a high level of service and comply with or exceed current regulatory requirements.
o unclear what problems the proposed scheme is actually trying to address.
• The registration scheme suggested by the Association of Scotland’s Self-Caterers (ASSC) should be taken forward instead of the proposed licensing system.
• The proposed licensing system should not apply to traditional Bed and Breakfast accommodation, including small Guest Houses, as these comply with relevant legislation and do not cause issues for neighbours or surrounding communities.
• Any licensing or registration system must take account of the different challenges facing short-term lets in urban and rural areas.
• A license should not be required for any property managed by a professional owner/agent and/or accredited by an established trade body such as Visit Scotland or the AA.
• Licensing of short-term lets should only be introduced in those areas experiencing problems, principally central Edinburgh.
• Licences should automatically renew, unless there is evidence of non-compliance with licence conditions.
• Licensing fees should be as low as possible and set at a national level, preventing local authorities from using the system to raise additional revenue.

Question 4 asked “Is there anything else about the proposed licensing system, or its potential impact, that you would like to mention to the Committee.”  1442 respondents answered this question.  Again, many responses simply reiterated points already highlighted above.  However, a number of wider issues that were not generally mentioned in response to previous questions were highlighted by a number of respondents.  These can be categorised under two broad headings, “negative impacts” and positive impacts”.  These themes are outlined below.

• This is a very difficult time to impose additional costs and bureaucracy on short-term let providers, as the Scottish tourism industry is struggling to recover from the impact of coronavirus lockdowns and national/international travel restrictions.
• The licensing of short-term lets will not produce an increase in the availability of affordable homes. Owners who choose to exit the industry if licensing is introduced may choose to keep properties as second homes or sell properties on the open market.  Given that short-term lets tend to be concentrated in areas where house prices are already above average, these are unlikely to be “affordable”.  Those who let rooms within their own homes may simply stop doing so.
• Licensing favours large-scale short-term let businesses, which own many properties.  Such businesses have the resources to deal with increased paperwork and can absorb additional costs, unlike those who share their home or own one or two properties.  The licensing scheme could lead to consolidation within the industry, limiting availability and competition.

• The concentration of short-term lets in some areas is affecting the ability of people to live near family, work, and education – hollowing out established communities and disrupting local housing and job markets.  The licensing scheme should help return some of these homes and flats to the use for which they were built, to the benefit of communities.
• The licensing scheme will offer respite to those living next to badly managed short-term lets, which are a source of disturbance, nuisance and anti-social behaviour.

Letter from Cabinet Secretary for Social Justice, Housing and Local Government to the Convener - 7 October 2021

Letter from Cabinet Secretary for Social Justice, Housing and Local Government to the Convener - Monday 21 June 2021